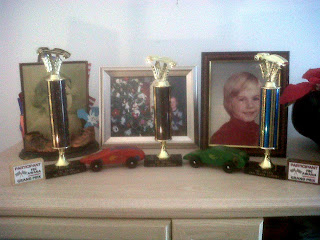 My sons enjoyed their first ever pinewood derby race this weekend. The event brought out the father and the child in me. On the fatherly side, I used a hacksaw and carving knife to shape two oblong blocks of wood to each son’s request. My older son wanted a red Ferrari Testarossa with blue stripes across the top while my younger son preferred a forest green Porsche 928 with bulldog and checkered flag decals. We certainly don’t own either automobile, but the Internet’s a great place for viewing such dream cars.

Once sealed and spray-painted to spec, I drilled holes into the bottom of each car near each wheelbase. I melted solder wire with a smoking, soldering iron and let the molten lead drip into the holes so that each car would weigh its five-ounce maximum. It’s best to have more weight in the back than in the front. I also rubbed graphite lubricant on the wheel axles, hoping to increase the speed of each gravity-driven car. Along with the decorative differences already noted, my boys used the same burst-of-flames decals on the front and sides so that each car would race down the track as if on fire.

The race itself unleashed the child in me. We sat together as a family with all the other families there in the assembly room. The four lane wood track that stretched 30 feet nearly reached the high ceiling. For every heat, the man on the tall ladder placed the colorful cars in their lanes, an audio countdown including revved engines burst through the surround sound speakers, and then the gate dropped. Four cars careened toward the computer-monitored finish line and crashed into a giant pillow. The overhead LCD projector displayed the times on the wide screen behind the track. Wow! Some cars won races by a second or two, some by hundredths of a second, and some by thousandths of a second. What a thrill! What a great way to spend time with your children!

As it turns out, my older son lost on the track but won best design, and my younger son won second best time in his particular heat as well as second best design. I’m glad every child went home with a participant plaque because all the children were thrilled, and it’s important to focus on the fun. All the details that feed competition can be overwhelming, but the central reason for the race is not for one child to win. A pinewood derby race is a community event that brings happy kids together and allows parents to feel young again.

I remember back when I was 10. My oldest brother made my pinewood derby car with me. It was a sparkling blue dragster with a white painted seat, a tiny black steering wheel and a small plastic windshield. In 1979, we were all huddled around the long two-lane track that was no taller than I was. At the loud bang of the cap gun, I froze and released my car late. Every heat was an elimination race. I lost in my first run, but I went home that night with my brother and something I now have in common with my sons – a best design trophy. What fun!
Posted by John Overman at 11:21 PM